Have YOU heard of ND yet?

Local, mysterious, distinctive, outgoing, fun, lovers of boating and the blue waters, involved in our community at all levels, caring, charitable…   becoming more and more numerous and visible…   who are the ND’s?

Maybe you’ve heard the rumors of rumors, about the mysterious organization whose members lurk among us.

Maybe you’ve sighted the occasional white polo shirt with “ND” emblazoned on the chest, and the distinctive upside-down anchor and rode* logo.

These people, if they may be considered part of humanity, seem heavily addicted to real reality. They seem to avoid that ghost of reality found in television or the Internet.

You might find them reading an actual book, or enjoying a beverage with friends, but mostly they relish wind in their hair, the warm sun on their faces, a boat deck heaving beneath them, constantly balancing from one sea leg to the other, squinting and scanning the horizon for other vessels, scrutinizing the water’s surface closer in for potentially damaging debris on or just below the surface, and ever watchful of the sky for signs of weather changes that only the seasoned ND’s can read.

But wait, you may find yourself identifying with that description.

The dark origins of this group are largely unknown. Some stories recite Polynesians, sailing crude rafts among the islands of the South Pacific. Another story relates Asian ancestry, not trekking across any land bridge into Canadian Russia (now Alaska), but rather sailing to and among the Aleutian Islands. 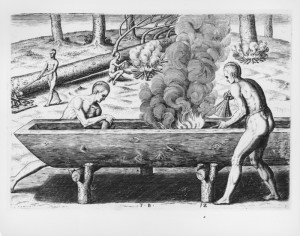 Other stories place the ND’s much earlier in pre-history to stone boat-making tools found on the island 0f Flores, dated to 750,000 years ago. Perhaps the ND’s built some of the first dugout canoes. Or, maybe the various vessels in ancient history used for coastal fishing and travel. Was the mesolithic boatyard found on the Isle of Wight in Britain part of ND heritage?

Give an ND enough libation and you may hear about the ND’s as part of maritime trade between civilizations dating back at least two millennia. They used the Arabian Sea as an important marine trade route since the era of the coastal sailing vessels from possibly as early as the 3rd millennium BCE, certainly the late 2nd millennium BCE, and through later days, known as the Age of Sail.

Another ND will tell the tale how in the time of Julius Caesar, several well-established combined land-sea trade routes depended upon water transport through the sea around the rough inland terrain features to its north.

The ND’s may have developed navigation in Sumer between the 4th and the 3rd millennium BCE, and were probably known by the Indians and the Chinese sailors before the Sumerians. Were ND’s responsible for the large reed craft found buried in the Egyptian desert, the ones used on trade routes through the Red Sea, importing spices from the “Land of Punt” (East Africa) and from Arabia? We wonder, don’t we?

Some ND’s may have been warrior sailors, military men of the sea. They formed the earliest navies to at first defend the homeland, and soon to conquer neighbors who least suspected a stealthy approach from the sea.

“AthenianWarship 400BC” by Wells, H. G. – The outline of history, being a plain history of life and mankind. New York: The Macmillan. Licensed under PD-US via Wikipedia

Did ND’s come over on the famed Mayflower? Or earlier, on the nicknamed Pinta, Niña, and Santa Maria? 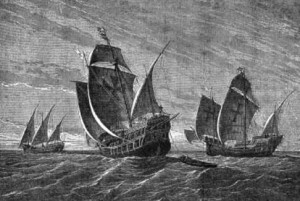 Are ND’s crewing the vast freighters that ply our Great Lakes, or the ocean-going behemoths that visit distant lands? 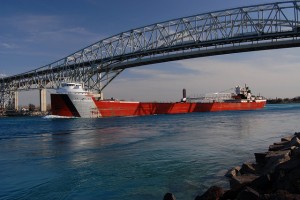 Arthur M. Anderson – upbound beneath the twin spans of the Blue Water Bridge, Port Huron, MI. Interesting aside – the Anderson was the ship nearest the Edmund Fitzgerald when it went down in Lake Superior on Nov. 10th, 1975. It had been in radio contact with the Fitz and was the first ship to search the area for survivors. Sadly, there were none.

ND rumors in more recent times involve raucous parties, ancient rites, the rituals passed down from antiquity. Are they associated with the Masons, the Rosicrucians, or Mesopotamians?

Locally, ND’s may have been spotted in various places where boats gather – PHYC, PHPS, and Black River Boat Club?

You may have seen, out of the corner of your eye, the secret handshake, or overheard the secret password “AYND” (pronounced (eye-nd”) It means, “Are You N.D.?”

The initiation and orientation process in this very select group is as onerous as it is mysterious.

To what extent have the ND’s infiltrated our fragile society? Unknown.

YOU have now discovered this web site. Beware, the ND’s. They may be contagious; their attitude is certainly infectious.

How can YOU become ND? We’ll, you may already be, and you’re not telling us. It’s time to come forth, to reveal your true self. Admit that the redness in your face is sunburn AND wind burn. Adorn yourself with the symbols of the rite, found in the Ship’s Store on this web site.

Proclaim your fanatical ways related to boats and water, and all associated therewith. And be sure many others will envy you, and perhaps ask you how to follow in your wake.

*Okay, I’ll help you out. Merriam-Webster: Definition of RODE :  a line (as of rope or chain) used to attach an anchor to a boat. Origin unknown. First Known Use: 1679.