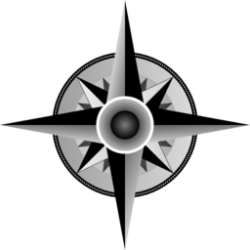 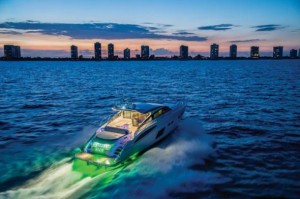 Your senses seem to heighten as the afterglow of the day fades along with with the range of vision. Navigating in low-light situations requires extra care and caution, true, but there’s something oddly freeing about focusing on the water around you and living in the moment.

It’s a feeling that the owner of the pictured Pershing 62 knows well. Decked out with a dramatic lighting scheme, he likely looks for any excuse to cruise at sunset to show off the LED lighting he had installed by Underwater Lights Limited in Ft. Lauderdale. And if, for some reason, he isn’t really feeling the green lighting on a certain evening, a few taps of the iPad screen change the lights to any other color of the rainbow.

Green, blue, red, or whatever color the owner chooses, this shot has us dreaming of our next sunset cruise.

Photograph and text by Jonathan Cooper

Idyllic scenery, a first-class marina, and an intriguing past make Roche Harbor Resort & Marina on San Juan Island the go-to destination for mariners in the Pacific Northwest. Whether you’re staying long-term or simply using it as a stepping stone for longer passages to British Columbia or Alaska, Roche Harbor offers a little bit of everything.

And Roche really heats up after Memorial Day. Boaters can enjoy the resort’s jovial Fourth of July celebration, ongoing colors ceremony at sundown, and its suite of family-friendly activities, including a heated pool, serpentine bike trails, and a pristine bocce court, and cap the evening by dining at McMillin’s linen-tabled restaurant on seafood plucked from local waters, or take it down a notch and dine al fresco at Madrona. The food and libations menu at either will not disappoint.

It’s no wonder that boatbuilders also understand Roche’s greatness. Manufacturers and owners’ groups alike have filled the marina’s slips for decades, with no sign of slowing down. Makes of all sizes grace these docks from May to October, ranging in size and pedigree from such beloved builders as Ocean Alexander, Ranger Tugs, Grand Banks (pictured here), and countless others. Whether you come by pocket cruiser or megayacht, Roche Harbor has something for everyone. 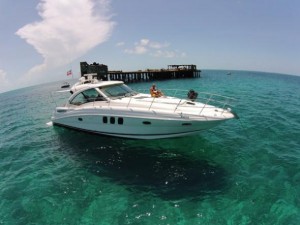 Power & Motoryacht reader Domingo Salermo is passionate about his hobbies, and one of his favorites is cruising aboard his Sea Ray Sundancer 48 in his home waters of Florida and shooting photos and videos from his DJI Phantom II drone. Salermo merged his hobbies this past summer while anchored off of the SS Sapona—the wreck of a concrete-hulled steamer that ran aground off Bimini during a hurricane in 1926 (shown in the background). After shooting the wreck he captured this shot of his meticulously maintained Sundancer as it appears almost to hover in emerald water. Concerning his passion for boating he says, “Boating is part of my life; it’s my connection with nature and my escape from the world.” And that makes perfect sense to us. Thanks for the awesome photo, Domingo. 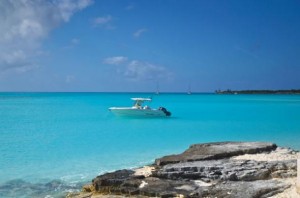 A Boston Whaler rests at anchor in some of the bluest water we’ve ever seen at Cape Santa Maria on Long Island in the Bahamas. 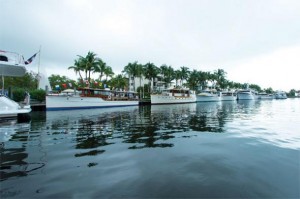 Ever wonder what it would be like to travel back in time and charter a yacht in the 1950s? You escape the reality of the Cold War by sitting back in the saloon of a glistening Trumpy, Elvis’s “Heartbreak Hotel” crackles through the radio as you swirl a glass of Old Foresters. Not so bad, huh?

Alas, while we can’t go back in time, Key Largo’s Ocean Reef Club offers the next best thing, a rendezvous of sorts in early December called Vintage Weekend, which attracts antique yachts, cars, and planes from across the country and around the world. And for three days, the many enthusiasts come together—bound by a passion for restoration—to celebrate the craftsmanship of the vessels and vehicles on display. It’s a weekend that proves while our vices and taste in music might change over the decades, good design and pretty boats are timeless. For more photos from Vintage Weekend, see here. 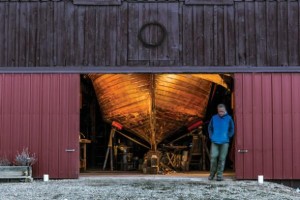 Photograph and story by Jonathan Cooper

Cradled in a barn at the foothills of the Rocky Mountains sits Eric Paulsen’s pride and joy, a 1968 Grand Banks 42. She paints a peculiar picture in her landlocked home north of Boulder, Colorado, where she has been dry-docked for the past six years as Paulsen carries out a stem to stern restoration. There’s still plenty of work in front of him, but Paulsen displays no signs of the weary carpenter: He does admit, however, to looking forward to the day when Splinters begins to cruise the waters of the Pacific Northwest. 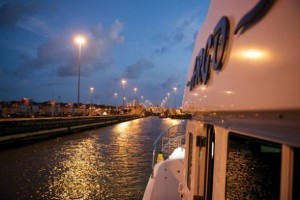 Photograph and story by Mark Fusco

Entering the Seventh Wonder of the World is a peculiar feeling. Despite being a nautical shortcut between oceans, a quick glance at your chart reveals that the Atlantic entry to the Panama Canal is actually farther west than the locks on the Pacific side. The next shock is the company you encounter. Even a sizable cruiser such as Argo, a Nordhavn 68 fairly accustomed to being on the larger side at any marina, appears to shrink uncontrollably when passed by the seemingly endless, brightly colored hulls of Maersk and Wallenius Wilhelmsen shipping liners.

While everything about the canal is big, the rest is all a waiting game. The canal runs 24 hours a day, and by the time it was our turn to enter the Gatun Locks bound for the Pacific the sun had long gone. In this photo, Argo is entering the second “step” of the three-stage Gatun Lock. By the end, the locks will have lifted the 200,000-plus-pound Nordhavn some 85 feet above sea level to the surface of Gatun Lake, at a pace that is barely noticeable to those aboard. Sharing our 110-foot-wide elevator with BBC Indiana (Antigua and Barbuda) and Kim B, a Panamanian workboat, we could finally appreciate getting out from under that old military catchphrase, “Hurry up and wait.” Until the next lock, that is. 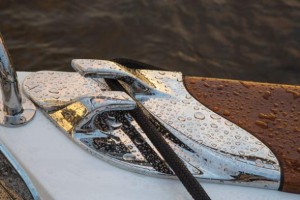 Sunsets get too much credit. Sure, they’re pretty and pair well with tall rum drinks. But as those who force themselves from their berths at dawn can attest, nothing beats a good sunrise on the water. You step out into the cockpit, your bare feet register mild shock before adjusting to the cool morning dew on the decks. There is a brisk chill in the air while the sun battles to burn through a thin veil of haze. And it’s silent. Absolutely drop-dead silent. Watching the sun rise and reflect over the water you’ll be left to ponder the question, is there a better way to begin a day? Spoiler alert: There isn’t. —Daniel Harding Jr. 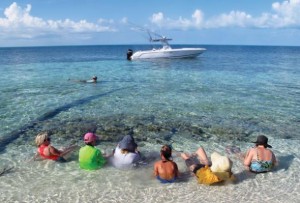 “This photo shows the crew and guests of Jumbo Coconut V as they enjoy the crystal-clear water off the small island of Indian Cay, north of West End, Grand Bahama. The Jumbo Coconut V is homeported in Hampton, Virginia. The captain and two lucky crew members made the crossing to West End for a summer vacation.” It’s hard to argue with the color of the water. 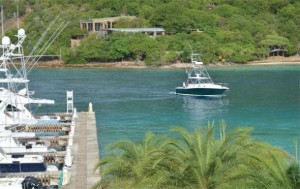 “Scrub Island has become one of my family’s favorite stopovers during our annual Virgin Islands cruise. I’ve been coming here since it was just Donovan’s Reef Restaurant, a sleepy little waterside tavern with some of the best short ribs I’ve ever tasted. During the last decade the island has transformed into a sprawling, luxurious resort and marina. We usually time our visit during the middle of our cruise when kids need a little time in the pool and adults may want to spread out and enjoy some fine-dining ashore with room to roam. This past summer the marina was full of sportfishing boats combing the waters for wahoo, marlin, and billfish. This well-maintained Pursuit 3400 was heading back to her slip after a day on the water. Note, the current rips through this area. Great Camanoe is shown in the background.”

Definitely a Nautically Disturbed individual. Suffers withdrawal when away from water or boats. A naval engineer, serial entrepreneur, computer geek, and psychologist.

View all posts by Bill →