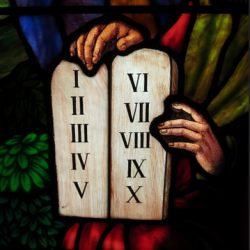 We know about the Ten Commandments. What we don’t know is there were eleven.

When the Kramer Walker briefly had doubts about biblical origins, he went looking for new answers. He sighted the mount from afar, and knew he’d have to climb to its summit to find what he needed.

He consulted experts and the stars, he hired guides and sherpas, he amassed great amounts of proper equipment and supplies, he used most of his considerable wealth to plan the great trek.

On the appointed day, even with some remaining trepidation, he and his entourage set out. They trudged upwards for many days. They camped each night on a different plateau, and sometimes on an extreme slope. They braved the mighty winds, dazzling lightening, and white-out blizzards. In the hours they could move, they had to rest at times just to get the caked ice off their eyes and beards. And sometimes, their lungs ached and blew snow out on each exhalation.

Finally, late one afternoon, the clouds broke and they emerged onto a green meadow. Yes, green. Far above the tree line, and even above the blinding glacial expanses, they found a broad and bright green meadow. The Kramer Walker was so stunned, he stopped his caravan and had them set up camp.

While his followers worked, the Kramer Walker dropped his heavy pack, pulled off his coat, hat, and thick gloves, and walked toward yet higher ground. Out of sight of his camp, alone and reverent, the voice came to him. It was a low and reverberating voice, a strong voice, a female voice.

She related to the Kramer Walker how the ten commandments they grew up with were the true and most worthy commandments, but… perhaps there was one more, maybe the best one?

“Yes, what is it?” the Kramer Walker wanted to know.

She waited for him to calm down. Then she said, “The Eleventh Commandment is:

Thou shall build vessels that float on water, and enjoy being on them often.”

Definitely a Nautically Disturbed individual. Suffers withdrawal when away from water or boats. A naval engineer, serial entrepreneur, computer geek, and psychologist.

View all posts by Bill →